Neccessity has given birth to hundreds of variations on the theme of pedal-powered cargo transport. Most attempts arrive at very similar solutions along certain themes. I've attempted to give examples of each type of cargo conversion. The challenge here is to focus on designs that can be built from bicycles and a few other available parts, such as steel pipe. However, in the interest of innovation, I'll include designs that require special parts in case that requirement can be overcome.

*Remember that most anything can also be made watertight, with the right container attached!

*I'll also discuss these designs in terms of peoplemoving. 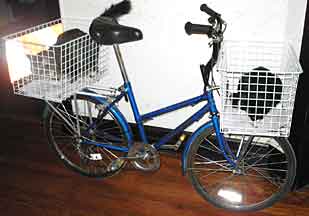 By far the simplest conversion. The flatbed racks can be made out of most anything, and so can the baskets. The advantage of this design is its simplicity, but it is limited as to the amount of weight one can carry. A common problem with this sort of design is that too much weight ahead of the head tube greatly affects steering.

With just a flat rack on the back, a person can sit and ride.

A little more complex to build than the basic crate, but with the advantage of greater volume capacity, if not weight. Suffers from the same steering issues if too much weight is loaded up front.

The Cycle Truck was very popular in the U.S. from the 30's through the 60's. During that time its design never changed. You could probably rig one up without welding, but for maximum capacity you'd want to weld it. Note that the weight does not affect the steering! However, if you were going to go through all that trouble, you might as well just make a mule: 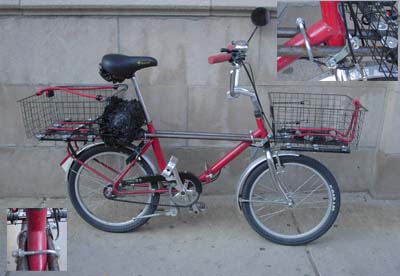 Alex Wilson of the Rat Patrol specializes in a beast that is sturdy and short, like the Mule. This one is called the "Red Ass". Mules are beautiful in their simplicity. Instead of concentrating the weight up front, it is cantilevered over each wheel. No steering issues. You can carry approx 150 lbs on one that simply consists of two pipes bolted around a bike frame! Very easy to make, with great capacity and handling. These could be churned out by the dozen with a short list of parts: Pipes, u-bolts, nuts, baskets. Welding them would only make them stronger. 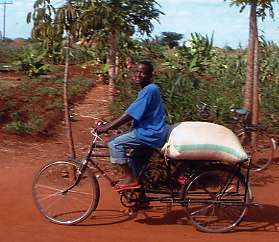 Perhaps the best cargo bike for medium loads, especially for distance and single-track. A person can ride on the flatbed, and tremendous amounts of cargo can be carried in the saddlebags. The bottom has tubes through which poles can be affixed for even greater volume. This bike, along with front and rear flatbeds, approach the maximum load for a single-track, two-wheeled vehicle. Note that Xtracycle has a program for shipping these to developing countries:

Not as complicated as it looks. About the same difficulty as the back flatbed in terms of making it from bike parts. It uses a pushpin steering system, and since the head tube is still in front of the load, it steers just fine. You can carry a person and the driver can keep an eye on his or her load.

The trouble with trikes is that they require a differential. A solid axle causes one tire to skid when you turn. One solution is to make only one wheel a drive wheel, but why modify an existing bike just to move the drive wheel over? A bad solution for our needs. However, someone ambitious might construct a flatbed trike: 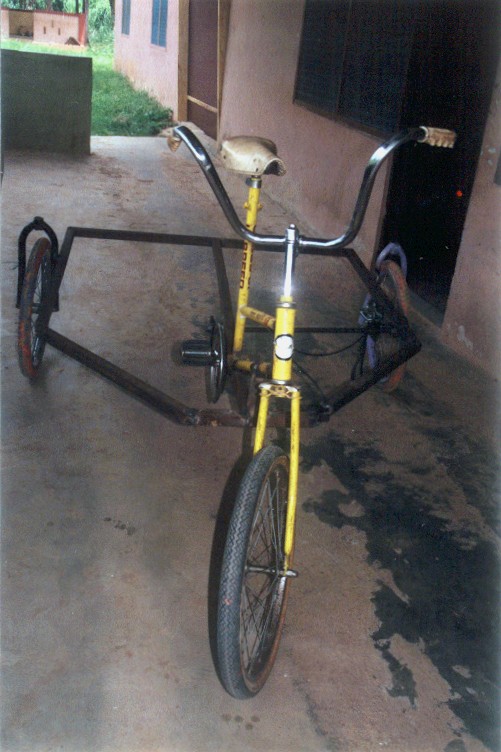 ...simply because you can make that bed as big as you want. So perhaps the trike has an application after all, for transporting something enormous. This is the philosophy behind the standard rickshaw. But, as with all "delta" trikes (one wheel in the center up front, two in the back), you either find a differential or you skid when you turn, and even then you have to construct an axle and use cart wheels rather than bike wheels. 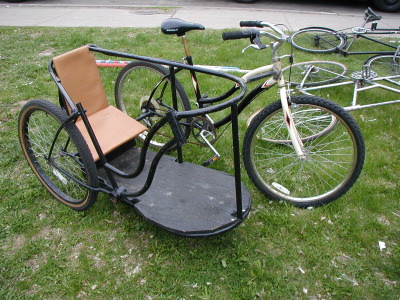 This is the solution to the tricycle's problems. Very simple to make with welding. They can be designed to carry a passenger (like this one) or cargo, for example with a giant bathtub-shaped bucket as a sidecar. I have seen a tandem sidecar that can carry 1000 lbs, although it used a cart wheel on the outside (wheel strength will be the weak point in most of these designs, and one solution is to use smaller wheels). In my experience, nothing on two wheels beats the mule and nothing on three beats the sidecar for the perfect synthesis of capacity versus simplicity. 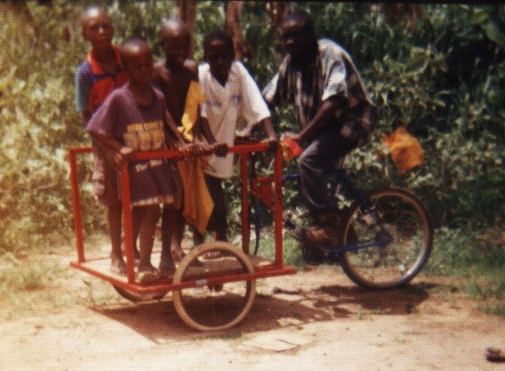 This design is surprisingly common, given its faults. Well made they can carry a lot or even a few people (as a cyclo), but the problem (again) comes from having all of your weight ahead of the head tube. The bike itself begins to function like an outboard motor, meaning it has to get behind the weight before it can push. This means the bike has a tendency to jackknife at high speeds (it folds in on itself). If, during construction, the head tube is not made perfectly vertical, the bike won't ride at all. Other than that, it's fairly simple to make, but I'd rather not. (Although, these can be made from other carts if they are available, simply by attaching a bike to the back of anything two-wheeled- which is why I include them here.) This silly jellyfish was the only picture I could find of one of these. Basically you build a bed between two bikes, and link the steering with a pushpin. The only advantage to this is that two people can pedal it.

With four wheels, the size of the frame is up to how much steel you want to shlep around. 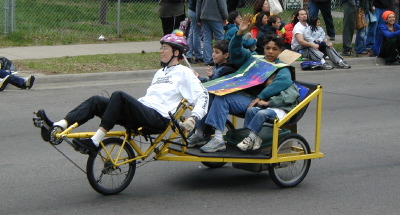 Very challenging to make! But the recumbent position allows one driver to pull a lot of weight (this one is sold as having a 700 lb capacity).

The Rat Patrol has made a few of these "Rat Tandems", or Randems. They are quick and easy to make out of two bikes. They make excellent taxis, because the passenger has to help! Because they tend to be short, they're even better for an adult and a child. 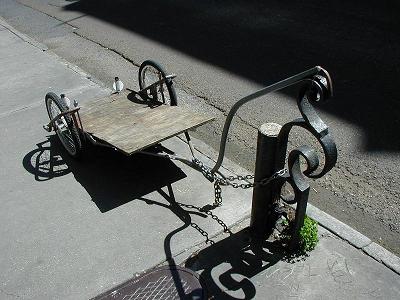 Almost anything can become a flatbed trailer (we make ours from two kiddie bikes). All you need is two forks (or two rear triangles). Its capacity and size are up to the builder. 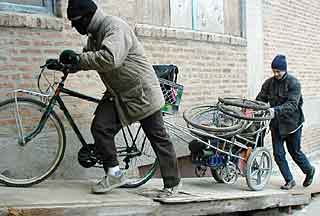 A wheelchair can quickly be made into a trailer without any welds. You could, conceivably, bolt on the hitch, take someone somewhere, and unbolt it, all without disturbing the passenger!

I couldn't find a picture of one of these, but if you take the sides from a broken wheelchair and build a low bed in between them, you have a very stable trailer.

The hitch on these would be difficult to duplicate, but this trailer rides very well. Not too much capacity, though.

The Wheelie is no longer manufactured, and I've never made one, so I couldn't find any pictures. However, imagine a single tube running from a hitch on the seat post to a single fork and wheel. Add a crossbar at the top and the bottom, and hang two sacks from it. While the capacity's not that great, this can be quickly made, possibly without welding, for carrying small loads.